When my plane touched down in Copenhagen, I immediately made a beeline for Nyhavn to see the iconic, colorful buildings and the boats floating beside them.

Each building boasted fantastic restaurants and beverages, and people shouted out from the docks, encouraging tourists to sign up for guided tours. On any other given day, I probably would’ve succumbed to the temptation, but that day, I had another goal in mind.

I was going to hunt for giants.

Nestled in various wooded areas around Copenhagen are six giants, made entirely from local scrap wood found by artist and sculptor Thomas Dambo. While researching what to do on my trip, I came across an article about these large sculptures, and they immediately piqued my interest. The Forgotten Giants, as they are aptly named, were created to encourage people to get off the beaten track and explore places they normally wouldn’t.

I was only going to be in Copenhagen for a few days, so I knew I had only one day to go on this giant adventure. Because of my shortened time frame, a car was necessary. I grabbed my giant-locator toolkit (comprised of a hand-drawn map, my camera, my boyfriend, and his GPS), and set off to find the giants.

Resting peacefully in a park near Rødovre, Sleeping Louis is the closest giant to the city of Copenhagen. We drove to the Absalon parking lot and started our hike. What we didn’t realize was that we unknowingly immediately walked past the giant. Sleeping Louis was, obviously, sleeping, so he missed our calls. If you’re out looking for him, he can be found on the hill after the first bend in the paved pathway. You’ll see a smaller hill to your left with an even smaller dirt path, and that is your cue to start the climb! Once you’re at the top of the hill, you’ll see Sleeping Louis with his mouth gaping open — wide enough for people to climb inside!

But since Louis was sleeping so soundly, we didn’t want to risk waking him. Instead, we decided to go visit his sister Trine, who also resides on a nearby hill. 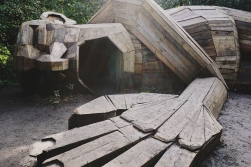 The easiest way to visit Hilltop Trine is to park at the Quark Nature Center, a tourist attraction in Hvidovre that promotes nature and science education for children. If you walk past the chicken coops, you’ll quickly find the hill where Trine is lazily lounging. You can choose to stay at the top of the hill and climb from her shoulders to her outstretched hands, or approach her from her extended leg.

Because of her prime location and wonderful disposition, Trine was very popular by the time we arrived. Not wanting to monopolize too much of her time, we moved on to see giant number three: Oscar Under the Bridge. 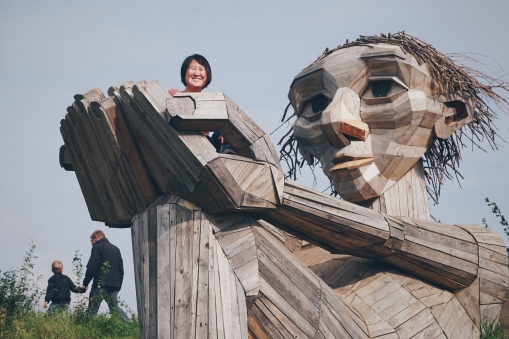 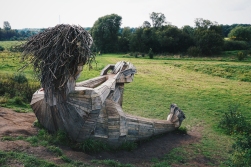 Naturally, Oscar Under the Bridge is, well, hiding under a bridge. He’s actually the easiest giant to find, but he takes the longest to reach. When visiting Oscar, you can park at Ishøj Strand then continue on the walking path until you reach the first bridge, where you will see Oscar’s hand holding the rail. From there, you can take a peek under the bridge and see Oscar lying there, his arms outstretched to help hold up the structure.

It took us roughly 10 to 15 minutes to walk from the parking lot to the first bridge, which added a little hustle in our step. Having spent a decent amount of time with each giant, we knew that we needed to hurry if we were going to see them all in one day. After all, we still had three more to go! 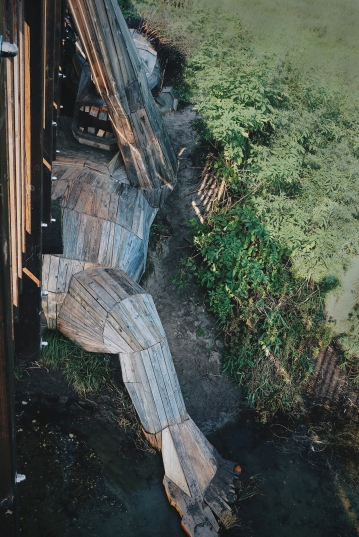 Oscar Under the Bridge

Oscar Under the Bridge

The next giant was probably my favorite. Despite her name and her small stature, Little Tilda still towers over any human who visits her in Vallensbæk Mose. But it’s not just her size that makes her so intriguing, and it’s not her adorable tail either. It’s the fact that Dambo built 28 birdhouses inside Little Tilde to help shelter birds and other small animals during the winter months.

If you park in the Spisetedet Mosen parking lot, it’s relatively easy to find Tilde. She hides behind a tree where the forest ends, and overlooks a beautiful lake. Her brother Thomas also lives in Vallensbæk Mose, so we decided to pay him a visit next. 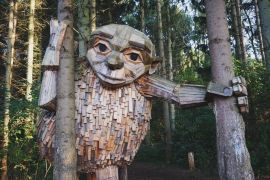 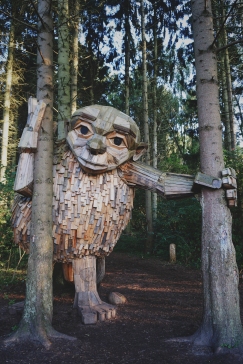 Before I tell you too much about Thomas, I will say that we cheated when trying to find him because someone had already geotagged he and Little Tilde’s locations on Google Maps. Since both are in the same forest area (albeit, on opposite sides of a lake), we knew that it would take too long to walk to him and didn’t want to risk the sun setting before we saw the last giant. Rendsagervej is the street closest to the area where Thomas can be found, so we parked the car in the first available spot and started our trek.

Thomas is indeed on a mountain or, at least, a very steep hill. Like Tilde, the area surrounding him is stunning, but instead of a lake, he looks down at a field in Albertslund. Thomas’ long legs are sprawled out, and he’s so laid back he’ll let you climb on him and even sit with him to enjoy the scenery. He’s a friendly one, but would probably be the hardest to locate if you were simply walking around.

Thomas on a Mountain

Thomas on a Mountain and me

Thomas on a Mountain

You could say we saved the best for last, and Teddy would certainly agree! He’s even made himself very easy to approach — all you have to do is park your car in the furthest parking lot inside Hakkemøsen Park, and walk through a small field until you reach a trail that brings you straight to Teddy. But don’t worry about the small stream that prevents you from reaching him; Teddy Friendly has already offered his arm out to help you across.

Teddy Friendly and me

Going on this type of scavenger hunt is a great activity for families with children, or simply for adventurers who want to feel a bit young at heart.

The sun was setting by the time we finished our search, our clothing a bit dirty and our spirits high. But we ended our hunt with six new friends of… giant proportions.