One of my favorite restaurants in Antwerp is one that I recently discovered, a small Japanese fusion restaurant that’s neatly tucked away on the Vrijdagsmarkt. The restaurant, which holds roughly 30 people at it’s maximum capacity, has been gaining notoriety around the city for having “the best sushi in Antwerp,” alongside other “Japanese dishes with a Western twist.”

Immediately upon entering DIM, we were brought to a chic waiting area and offered an aperitif. We opted for a sparkling sake, having never tried it before, and sipped the sake while eating a salted watermelon dish that was as refreshing as it was delicious. The atmosphere of the restaurant was very contemporary and yet cozy; though everything had a sleek and modern design, it was still small enough to offer a warm vibe. The waitstaff was attentive and friendly, something that doesn’t always happen in the cold, fashion city. I would call the place positively gezellig, a Dutch word that translates to “cosy” but seems to portray so much more.

DIM offers sushi, a la carte items, and tasting menus in groups of 6, 9, or 12. After a little debate, we agreed upon a 9 course menu (€105) and a nice bottle of white wine. Even though sushi is my favorite type of food, we really wanted to get a taste of what DIM  had to offer, and tasting courses are the best way to do so. We took a seat at our table, and our first course was immediately served. It was a small plate of salmon and quinoa with truffle oil… and it was the best thing I’ve ever had.

Okay, I’m exaggerating, but only a little. The flavors were explosive and delicious. When the waitress came back to check on us, I told her that it was my favorite dish I’ve eaten in Antwerp. She seemed pleased enough, then even more so when Jeroen chimed in, “…and she’s been here for 4 years.”

The rest of the dishes were also really good. For fish we were served tuna with egg yolk and pepper and a sea bass with caviar. Quickly followed was a lightly tempurad octopus, which Jeroen originally refused to eat (not being a fan of this type of ocean food), but eventually succumbed and admitted that it was downright delicious. Then came a tempurad soft shell crab, which was maybe my least favorite of the dishes. We continued onto our meats, which consisted of a crispy duck and grapefruit salad and chicken oysters, which are small pieces of “the juiciest part of the chicken.” Yes, I had to ask if a chicken oyster was a chicken or an oyster. 🙂 Also, fun fact, apparently it was the only part of the chicken that Napolean would eat. Our desserts were a small glass of panacotta, followed by a coconut ice cream with banana and Specaloos crumbles, a Belgian specialty cookie. 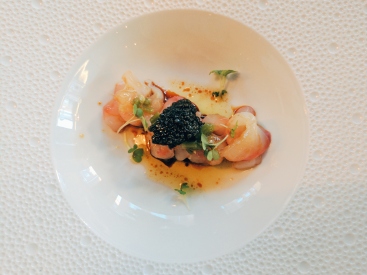 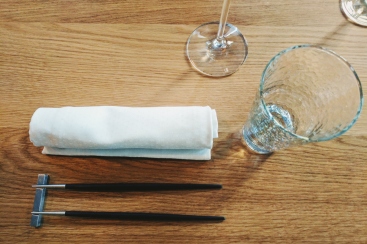 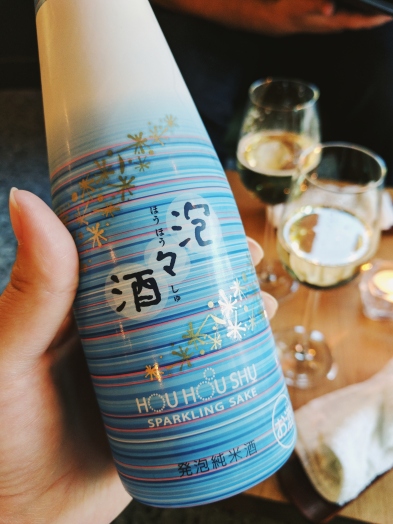 Since the restaurant just recently opened, it hasn’t been granted a Michelin star or their recommendations (yet). I will say, however, that if they keep up the good work, I am positive that they will get something within the year. Dimitri Proost is maybe one of the youngest head chefs I’ve seen, starting the restaurant at age 22. All I can say is, if he is this good in his early 20s, I can only imagine how much better he will become over the years.

If we had to do it again… and we will definitely do it again… I think we will try the sushi dishes, or perhaps more of the fish as it seems it is the chef’s area of expertise.

Either that or I’m just going to get 10 plates of that salmon dish.