But for real. Everything about Ireland is just so frickin’ fantastically green!

…and cold. Ireland was so much colder than I expected it to be. I’m not sure why I thought it would be warmer- probably because I was flying in from Iowa where the heat and humidity was just starting to get to that uncomfortable sweltering level… but yes, cold. Cold and green and beautiful and unforgettable… *sigh*  Ireland.

How did Ireland even come about? Well, it all started a few years ago when a good friend, Ms. Jamie, decided that she had had enough of the single life and was ready to tie the knot. Curt “put a ring on it,” they started wedding planning, and then they decided to have a destination wedding in Ireland and visit some more of Europe for their honeymoon. Fantastic idea. I immediately fell in love with the plan (yet did not start saving for it, I’m very bad at saving for things), and our friend Jessica (who I will refer to as “Moneybags” for the rest of this blog), decided she could afford the money and vacation time to go, as well.

Fast forward to June of 2011. Moneybags and I boarded the plane very early in Des Moines (Iowa), got to Chicago, and settled in for our 7 hour flight. When we arrived in Shannon, Ireland, it was also very early in the morning there, and we had not had much sleep on the plane. We went to the car rental place, where they money raped me- I mean, told me that my State-side insurance didn’t cover driving in Ireland. I reluctantly paid the extra amount, added a GPS, and took off to our vehicle, which was parked unpleasantly close to the next rental vehicle.

Can I just say, driving on the opposite side of the road in the opposite seat in the car is a very frustrating experience. Doing that for the first time, not knowing where you’re going, on approximately 3 hours of sleep is absolute hell. Our hotel for the first night was this beautiful hotel by Bunratty Castle, and it was only about a 15 minute drive from the airport, but I was down to my last nerve by the time we arrived. Jessica… I mean… Moneybags… was only 24 years old at the time and you have to be 25 to rent/drive a car, so I had the fortunate luck of driving the entire trip. Most of it I didn’t mind so much, but this drive to the hotel was definitely the worst. To make matters worse, by the time we got to the hotel it was still only around 8am and we couldn’t check in until at least 11am.

So what do any two well-educated, classy, smart women do for three hours while they wait for their room to be serviced? They sleep in the lobby, of course.

After we got to our rooms, had glorious naps, and refreshed ourselves, MB (for short) and I went out to explore the area. Jessica’s dad had bought us tickets to a Medieval dinner at Bunratty’s Castle, but we had a few hours to spare before that, so we went around, took photos, explored the (un-open) shops, and drank at some good ol’ Irish pubs. I went in and ordered a Strongbow- to which the bartender gave me a nice little smirk and said, “We don’t have Strongbow here– you want a Bulmer’s.”  And indeed I did. Bulmer’s: the Irish version of cider beer. 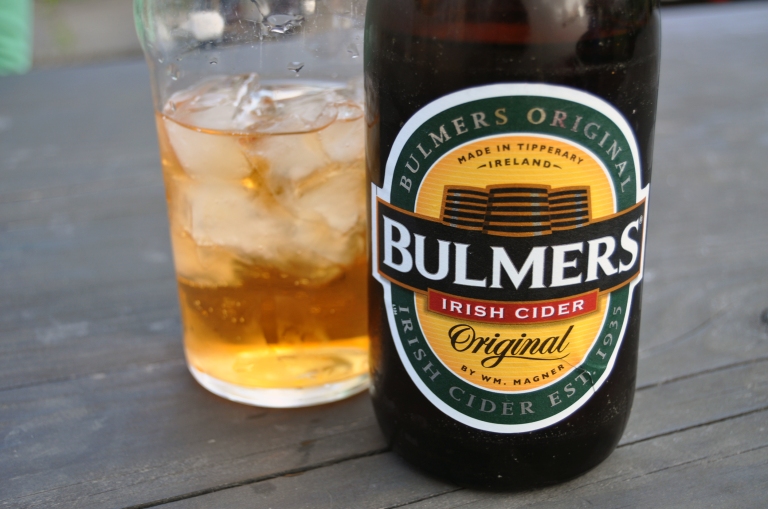 After our Medieval dinner, which was just as hokey and wonderful as I was hoping it would be, we went back to the room to sleep off the jet-lag. The next day we were planning on going to the Cliffs of Moher (which barely missed the cut for the 7 Natural Wonders of the World), and if that morning had been any indication, I needed at least six hours of sleep to be fairly functional while driving. …and even with adequate amounts of sleep, I still almost hit dogs. (I didn’t almost hit the dog, Jessica).

The Cliffs of Moher are BEAUTIFUL. One of my favorite places on the planet. It was so majestic; I know, I know, I sound sappy and touristy, but I just fell in love. Sure, it was a bit windy and a bit crowded, but the sights were unbelievable. And well worth the admission price (yes, there was an admission price for a natural wonder). Although it is unadvised, there are sections/gates/rocks to walk through/sneak under/climb over that will allow you even more spectacular views. It’s not advised because apparently the winds are so strong that people have been blown over the edge. I got close enough to the edge that it made my stomach drop and my knees shake. If you wanted to, you could literally sit on the edge and look down… but I have a feeling that’s where the “plummeting to your death” portion of your day might happen.

After we took off from the cliffs, which I could’ve spent a day admiring, we got back in the car and took many small, windy roads up to County Donegal to meet up with Jamie and her family for the wedding. The roads in Ireland are nuts. Giant tour buses have to stop to allow another tour bus to squeeze by on the “two way” (yeah right) roads. Farm animals graze in super green pastures, little tiny bed and breakfasts snake along the coast-line… it’s super great.

Anyway, the wedding. The wedding was fantastic, beautiful, and everything you’d want a wedding to be (aka: short). I took photos, I signed as a witness, Moneybags got to recite a beautiful poem about marriage… really, the whole thing was just a blast. The wedding was performed at the hotel, and then we walked across the street to a church where a priest gave a blessing and a sermon. Because Jamie and Curt aren’t Irish they couldn’t officially get married in a church, but they still wanted the religious aspect to the day.

After the wedding day, we all parted ways. The rest of Jamie’s family was going to do some more sight-seeing, Jamie and Curt were off on their honeymoon adventure, and Jessica and I had an adventure of our own: we were going to Dublin.

Our ride to Dublin was pretty uneventful. Stopped for gas, listened to great music, had good conversation, I didn’t hit any dogs… getting into Dublin, however, was another story. From what I had heard, Dublin was a pretty hard city to maneuver. To start with, our GPS told us the wrong location, so we spent a while walking around before we figured out that we should keep going. Secondly… well, secondly deserves its own paragraph.

Our hotel was located smack dab in the middle of the Temple Bar area- the hip, cool, drinky part of Dublin. But every time we seemed to be getting close to that hip, cool, drinky part of Dublin, we hit a detour. Police men were out telling cars to turn certain ways, road blocks were up to prevent you from turning down specific streets… we spent 2 hours driving around Dublin trying to find our damn hotel. because…

Because there was a gay pride parade going on that shut down not only the whole Temple Bar area, but also a good portion of the city. Hilarious! If only we had gotten there a few hours later, we could’ve partook in a wild and crazy time. There were floats, people dressed up in costumes, oh man. The more I think about it, the more bummed I am that we missed it. I even had on a shirt that said “Kiss me, I’m Iowaish” that could’ve gotten me a great deal of action. 😉

Once we got to our hotel, we quickly rewarded ourselves with some free Guinness. We chatted with the bartender, learned the quickest route to the Guinness Factory (the next day’s trip), and then went to recoup a bit before the night’s festivities. And that night we did get to experience Dublin. We went out to eat and did a bit of quiet bar hopping, walked around the city to the less crazy bars as well, and then ended up at the bar attached to our hotel, which had live Irish music playing. There we drank, we danced, and we met young Italian foreign exchange students on some sort of school trip. The next day we nursed our hangovers, walked around Dublin, checked out the Guinness factory, some parks, and made a day of it before getting ready to pack up again for the next leg of our trip: Italy. Ireland was a fantastic time and something I will definitely have to do again.

Jessica at the Guinness Factory 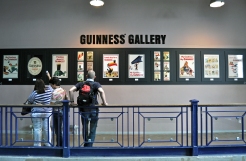 Pour yourself a Guinness

THE TRAVELIN’ SONG: Cliffs of Dover (Eric Johnson). They weren’t of Dover, but the Cliffs of Moher were so remarkable, the travelin’ song has to be a song about the sights. Plus, it’s one that I mastered on Guitar Hero, so I feel pretty good about it.

TIP FOR TRAVELERS: Your State-side driver’s insurance does not cover you
if you rent a carin Ireland. It may seem like the rental agencies are trying to take advantage of the situation, until you start driving. Then you realize why your insurance doesn’t work… because the roads are insanely narrow (and you’re driving on the opposite side than you’re used to).

DEFINITELY CHECK OUT: The Cliffs of Moher. It’s one of my favorite spots in the world.

One thought on “THE GRASS IS ALWAYS GREENER… IN IRELAND”