You know who’s one of the coolest people in the world? Your mom.

And by your mom, I really mean, my mom.

My mom is seriously super cool. She’s funny in a quirky-yet-extremely-sincere way, and she is honestly one of the sweetest people I know. She’s so nice that I’ve only heard her talk bad about one person once, and the story is too funny and inappropriate to share online. (Ask me in person, I’ll probably tell you.)

Well, I found out through our travel agent at work that many airlines were doing an amazing deal of tickets for only $1, plus taxes and fares. With that deal, a flight from Des Moines, Iowa to Brussels, Belgium was only $650, the cheapest I had ever seen! We knew we had to jump on the opportunity, so mom booked a last minute flight to travel back with me when I left the USA.

Now, my mom doesn’t travel that often, but when she does we try to see and do as much as possible. I knew Antwerp, Belgium a lot better than when she had visited years ago, so I had much more to show and do. But, last time she visited we took a weekend trip to Paris, France, and this time I wanted to take her to another country as well. I threw out the option to go to Amsterdam in the Netherlands, somewhere in Sweden (to rediscover our roots, ha), or to London in England. After a little deliberation and realizing she couldn’t do all three in a week, she chose London.

I really love London. It might have something to do with the fact everyone there also speaks English so I feel a bit more at home… or it might just be the fact that it’s a really beautiful city. Jeroen, mom, and I woke up bright and early (aka: 3:30AM, a bit too bright and early) to travel to the Eindhoven airport for our flight. The tickets were extremely cheap, only 80 euro per person round trip! God bless Ryan Air.

After we arrived to the Standsted Airport (which is actually an hour train ride or so outside of London), we used our train ride to map out what we would do in the big city. Mom really wanted to see Westminster Abbey and Big Ben, but everything else was just icing on the cake. Lucky for us, those two things are fairly close, so we could hit them with relative ease.

But first, lunch. We walked through the Borough Market, which was a cool area I had never been. I would’ve loved to explore it more, but my stomach was making most of the decisions at this point.

After my stomach ate and decided to take a nap, we kept walking. It was a really nice day, so we leisurely walked around, taking in the sights and popping into the occasional pub (another request of my cool mom) for a beer or two. We also mastered minding the gap and taking the tube to and from the areas we needed to be. 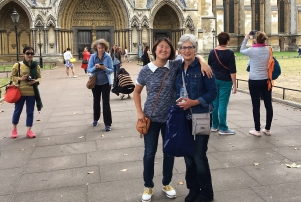 The second day we walked over the Millennium Bridge to check out the Tate Modern, a free modern art museum with ever changing displays. We walked around for an hour or so, avoiding the rain, then decided to go get breakfast near Shakespeare’s Globe Theater, since it is pretty much next door. We ate at The Swan at Shakespeare’s Globe, and I was loving the upcycled-yet-fancy look of the place, and the artisan breakfasts that were served. Jeroen got his typical English breakfast, his favorite thing about the UK, and we all got bloody marys. We actually taught the Belgian something that morning– he didn’t know that bloody marys were a morning drink! Well, they’re an any time of day drink, but especially good for a boozy brunch.

After we ate and drank our fill, we continued on our journey to see the typical touristy sights of London. We had covered Westminster, Big Ben, The London Eye, St. Paul’s Cathedral, the previous day. Today’s agenda was Buckingham’s Palace, the Tower of London, and the Tower Bridge.

It was drizzling on and off throughout the day, but mom just shrugged it off, saying it wouldn’t be an authentic trip to London unless we experienced a bit of its rainy weather. It also gave us a good excuse to stop in a few more pubs and check out the atmosphere.

That evening we had dinner at a place in the Clapham area, where we were staying. It was highly recommended on TripAdvisor, naming it a romantic place with many different wines and interesting tapas. A perfect place to bring your mother and boyfriend. 🙂

The Humble Grape has a rustic feel, with wooden benches and a dark ambiance. The tapas menu changes with the seasons and the chef’s mood, so we ordered a few bottles of wine and shared a mixture of foods. The wait staff was super friendly and attentive; one of the waiter’s was celebrating his birthday that day, so we made small talk of what he would do when he was done working and if he had any recommendations of fun things in the area.

The last day, we went to Camden, which is one of my favorite areas of London. If you like to people watch, to eat interesting foods, or to shop at markets, then Camden is definitely the place for you. It’s hipster meets punk meets elderly women getting their groceries. We ate breakfast at some greasy hole in the wall, then set out for another round of bloody marys and some shopping. Mom got some knick knacks for people back home… I’m not usually much of a shopper, but I found a scarf with fox prints on it, and I knew that it had to be mine. 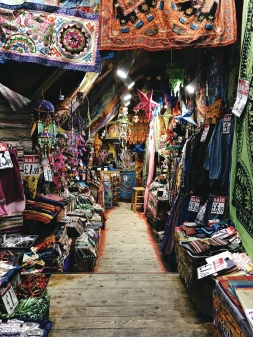 The last stop on our tour was a visit to Abbey Road Studios, the most famous recording studio in the world, where the Beatles recorded and made their iconic album cover.

I slightly miscalculated on our Uber ride where the studio was, so we ended up on a nice 20 minute walk along Abbey Road until we hit a swarm of people and knew we were in the right place. We hadn’t booked a tour in the actual studio itself (it wasn’t possible at that time), so we went to the gift shop to look around. We also walked across Abbey Road, but it was too impossible to get a good photo as there was constant traffic and about 100 people trying to do the same thing. They actually told us in the gift shop that when the Beatles were taking the photo the police shut down traffic on the road, but they only had 10 minutes to get the shot.

After Abbey Road, we went back to the metro to make our way back to the Standsted Airport. While on the train, the beverage cart went by, and Jeroen and I celebrated the success of the trip with a good ol’ fashioned Stella. You can take the boy out of Belgium, but you can’t take the Belgian out of the boy. 🙂

THE TRAVELIN’ SONG:  Fame and Fortune (The Libertines). Jeroen and I kept humming this song as we were walking around London, but since we don’t know all the words, we would just randomly shout out the words “Ro-ches-ter SQUARE” in the correct syncopation.

BUDGET: $350 for the weekend, for airfare, parking, transportation, food, and lodging. Whew. That’s a lot of things.

TIP FOR TRAVELERS:  Uber is your friend. The metro is super easy to use, but day passes are around $40… if you’re not going to too many areas, Uber will get you there just as quickly and for much less money, especially if you’re traveling with a small group.

DEFINITELY CHECK OUT:  Camden. It’s weird and touristy, but it is one of my favorite places.