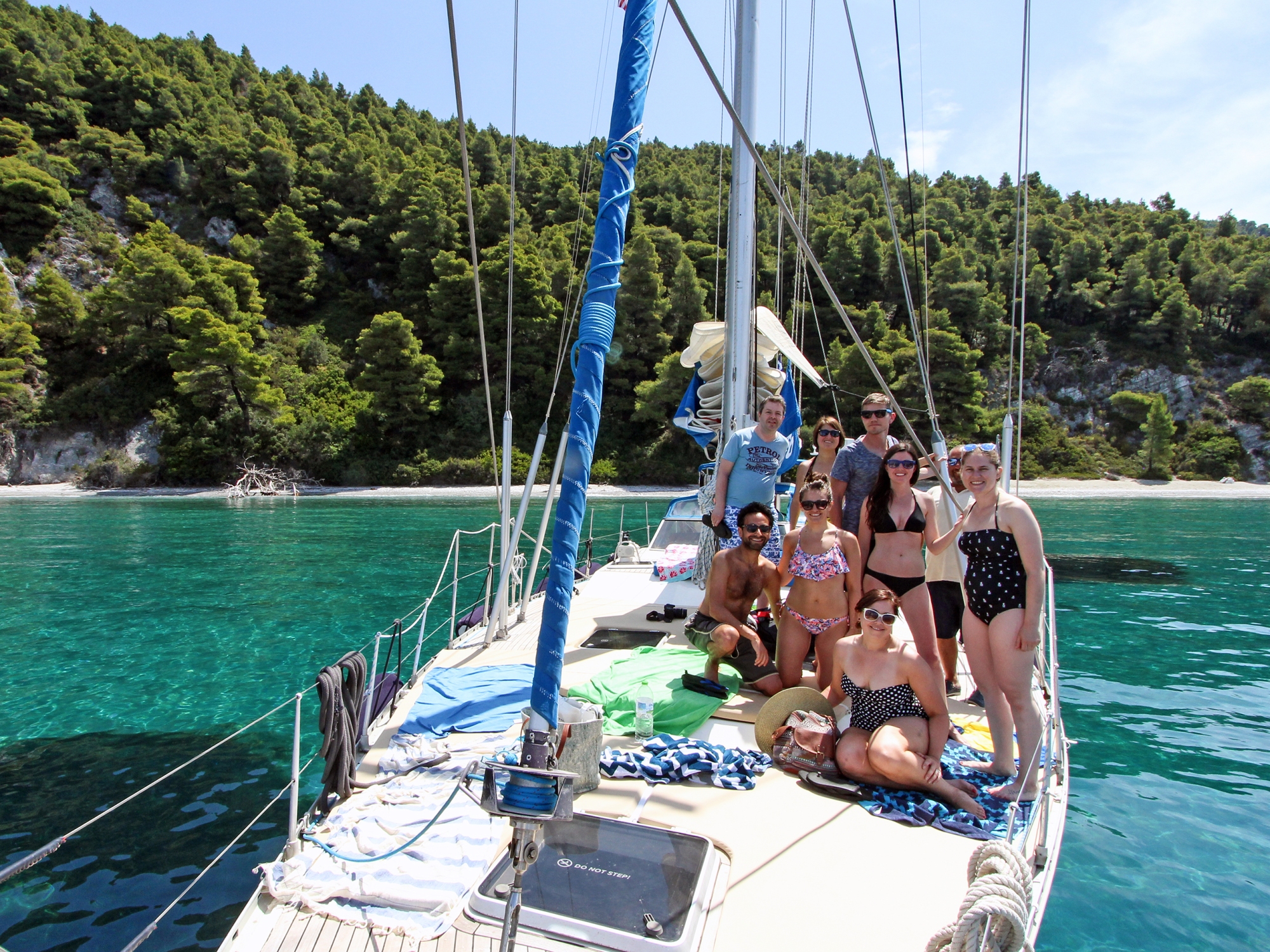 It’s official. I’m 30 years old. I’m not a girl, not yet a woman… although, I guess I thought 30 was pretty womanly when I was younger.

I knew I wanted to do something big for my birthday. Not because I’m that into celebrations, but because ever since I moved abroad, I don’t get the chance to see a lot of my close friends anymore. I figured a milestone birthday was as good of reason as any to get the gang together.

So who all came with on this trip? Well, I’ve made a chart for just such an explanation:

The gold lines signify strong friendships. Heart lines are for couples, and grey lines means they have met before and would at least acknowledge the other person’s presence.

We started our Greek adventure in Athens, the capitol of Greece. Since we all were taking different flights in from different areas of the world, we obviously arrived at different times. By the time I arrived to Greece and found our tour guide, Daphne (with Hella Travels), Jeroen, Ken, Jessica, and Jamie had all been enjoying some wine and the Greek sunshine.

That evening we went out for dinner and drinks at the 360 bar, which is a rooftop cocktail bar with an amazing view of the Acropolis. We stayed there all night and, eventually, Shawn and Kiley showed up. Sarah and Ari were arriving early Sunday morning, just in time for us to make our next flight to Skiathos.

And when I say “just in time,” I really do mean it. Ari arrived in the middle of the night and was waiting for us at the airport, with four espressos in his system to stay awake. But, Sarah’s flight was delayed. I was all for faking a seizure to prevent the airline from closing the gate, but luckily Sarah got there before we had to do anything too drastic. We all exchanged enthusiastic/relieved handshakes and hugs, then boarded a tiny plane to go the first island, Skiathos.

Skiathos is the island where they filmed the musical Mamma Mia, so it made perfect sense for us to plot out doing a musical rendition as well. The island really is picturesque; bars and restaurants line the pier, with many shops offering different off-roading adventures.

My favorite thing we did on Skiathos, and possibly on the whole trip, was the boat ride we took with Captain Ari and his wife. We boarded in the early morning, and they took us around the northwest Aegean Sea, stopping frequently for places to swim, snorkel, and cool off in the water. The boat tour also included an on-boat lunch, full of delicious, traditional Greek food. 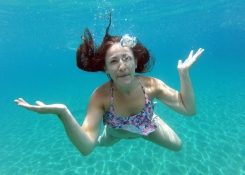 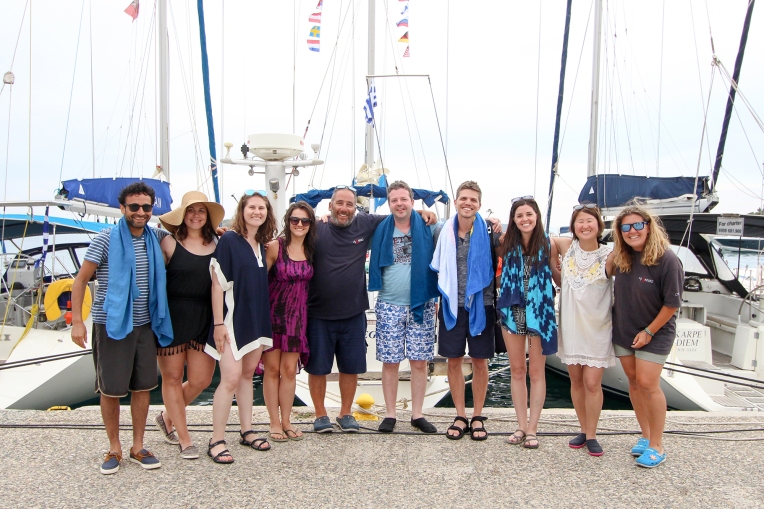 Our last night on the island, we celebrated my birthday at a nice little restaurant near the center of town. We all had branched off and done our own thing during the day (Shawn and Kiley rented a 4-wheeler and had taken it around, the gals+Ari had gone to a popular beach, and Ken and Jeroen had drank their body weight in ouzo), so it was nice to have a final get together before we moved on to the next island. Jeroen and Ken were heading back to Belgium because they had festival tickets, and Jessica’s girlfriend Vinika was meeting us in Santorini. 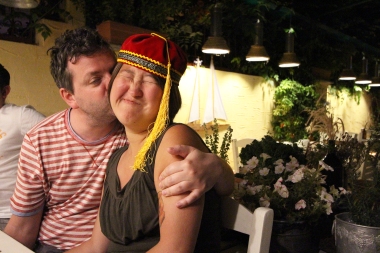 All in all, I had a great time on the island of Skiathos and would definitely recommend checking it out. Other highlights include tubing on a giant banana, watching Mamma Mia in an open air theater, getting lost because we were following a cat, and simple beach lounging. 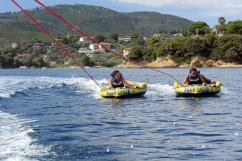 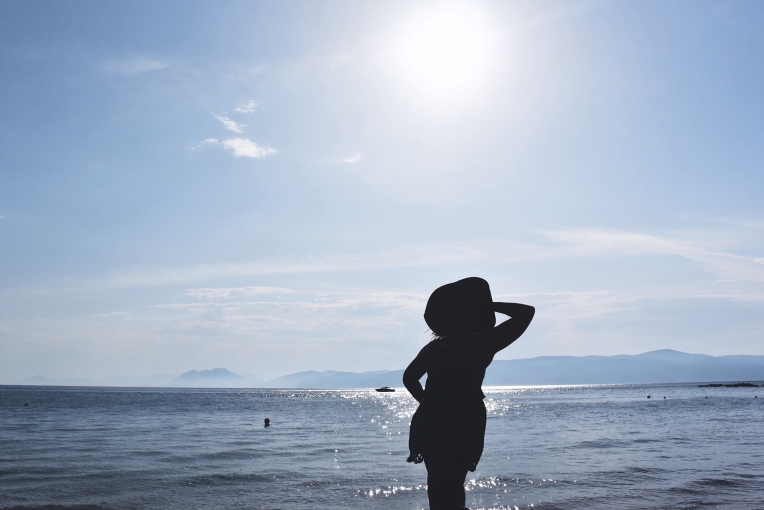 After Skiathos we said goodbye to Jeroen and Ken, and hello to Santorini. Um, wow. We were warned ahead of time that Santorini was a touristy island, but walking around for just 10 minutes confirmed why. Santorini is absolutely gorgeous. Stunning views, houses built into the cliffs… it’s what you picture when you think of Greece.

We stayed in a beautiful hotel that was about a 20 minute walk away from the main city in Santorini, but you wouldn’t catch me complaining at all. That 20 minute walk was along the cliffside coastline, and the views were absolutely incredible.

In fact, our whole time in Santorini was rather incredible. We took a boat tour on this island as well, and while it wasn’t as fun as the first, it was still fantastic. Our first stop was a volcanic mud bath area, where the water was warm and the smell of sulfur was everywhere. If you were hoping to smell like rotten eggs for the day, this is the place for you! We saw the iconic sunset in Oia, many donkeys hauling goods up and down the coastline, and the Red Beach, which really was… red. No false advertising there. 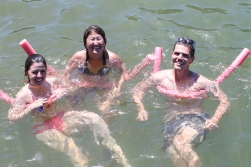 And I wasn’t the only person who was celebrating a birthday on this trip! Jamie, who is older and wiser, wanted to have her Greek cake and eat it too. Well, I don’t know if she actually wanted or expected a cake. But we did make her eat it.

The last cool thing we did while on the island was something that I had wanted to do for awhile, but never had the opportunity: Parasailing!

I had wanted to go parasailing when we were in Skiathos, but Jeroen wasn’t super keen on it, and Jessica wanted to wait until Vinika arrived because she also had been thinking of trying it. We all agreed that, even though it would probably be more expensive/touristy, we would try to find a place in Santorini.

It was relatively easy to find a place, but not so easy to arrange the actual sailing experience. Basically, me flying solo was screwing everything up. They wouldn’t let me go by myself, so I had to third wheel it with a couple. The person arranging everything wanted Sarah, me, and Jessica to go up together, but that would put Vinika and Ari together. And they’re not. Eventually, we convinced the guy that even though Ari was a muscular male, he actually weighed less than Sarah and I, and we could all go up together. 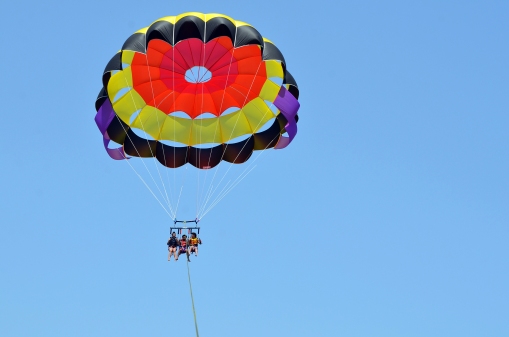 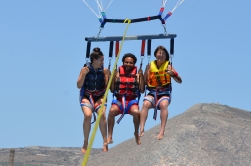 And it was super fun! I wasn’t sure if I’d be nervous, but I really wasn’t at all. It was exhilarating being up that high, but also fairly peaceful. I don’t think Ari felt the same, though, as he kept yelling at me because I was swinging my legs and moving around too much. 🙂

The last place we explored was Athens. Athens, the heart of Ancient Greece, has been a place I’ve always wanted to visit, because I have a ridiculously high interest in Greek mythology. I was really looking forward to walking the grounds and seeing the temples where these gods had originated.

Athens is a really interesting city. It’s like an old, traditional city met something hip and new, and this unique culture emerged. Fun restaurants and markets were stationed next to crumbling, ancient architecture. People of all different ethnicities swarmed the streets, taking in all the different sights and sounds. I really could’ve walked around Athens forever…

…Except that it was hot as balls. And that kind of curbed our enthusiasm.

We, of course, knew that if we only had one full day in Athens, we had to make the most of it, despite the weather conditions. The main site to cross off all of our lists was the Acropolis, which is full of marble monuments and is one of those most iconic and ancient places of the western world.

Words can’t really describe it, nor photos do the Acropolis justice. It was so weird, standing somewhere that has been around since 4000 BC. Many of the monuments (as well as the city itself) were dedicated to the goddess of war, Athena, which I suppose is strange poetic justice, because most of had been destroyed in battle.

The only let down of the day was that we spent too much time dicking around, so we didn’t get to the Acropolis Museum before it closed. I wasn’t too heartbroken, as museums are fun, but not always high on my list. I did feel bad for the members of the group who really wanted to see it, however. It’s my main regret for our time in Greece.

…My second regret is that we didn’t book another week.

We were so inspired of our time in Greece that we decided to do a Mamma Mia tribute, as it was filmed on the island of Skiathos. Please, enjoy! And visit Greece!

BUDGET: I worked with an amazing start-up travel company called Hella Travels, who arranged our transportation between islands, accommodations, most restaurants, and activities. Since we were the “trial group,” we got things for a bit cheaper than a normal trip, but overall it probably cost me roughly $2000.

TIP FOR TRAVELERS:  Greece is going through a bit of a financial crisis, so everything is less expensive there than you would anticipate. We ate until we were completely stuffed at this amazing rooftop restaurant in Athens, and we didn’t come close to breaking the bank.

DEFINITELY CHECK OUT:  Santorini is beautiful for views and sunsets, but it’s very touristy. The island of Skiathos had a much more laid back mentality.