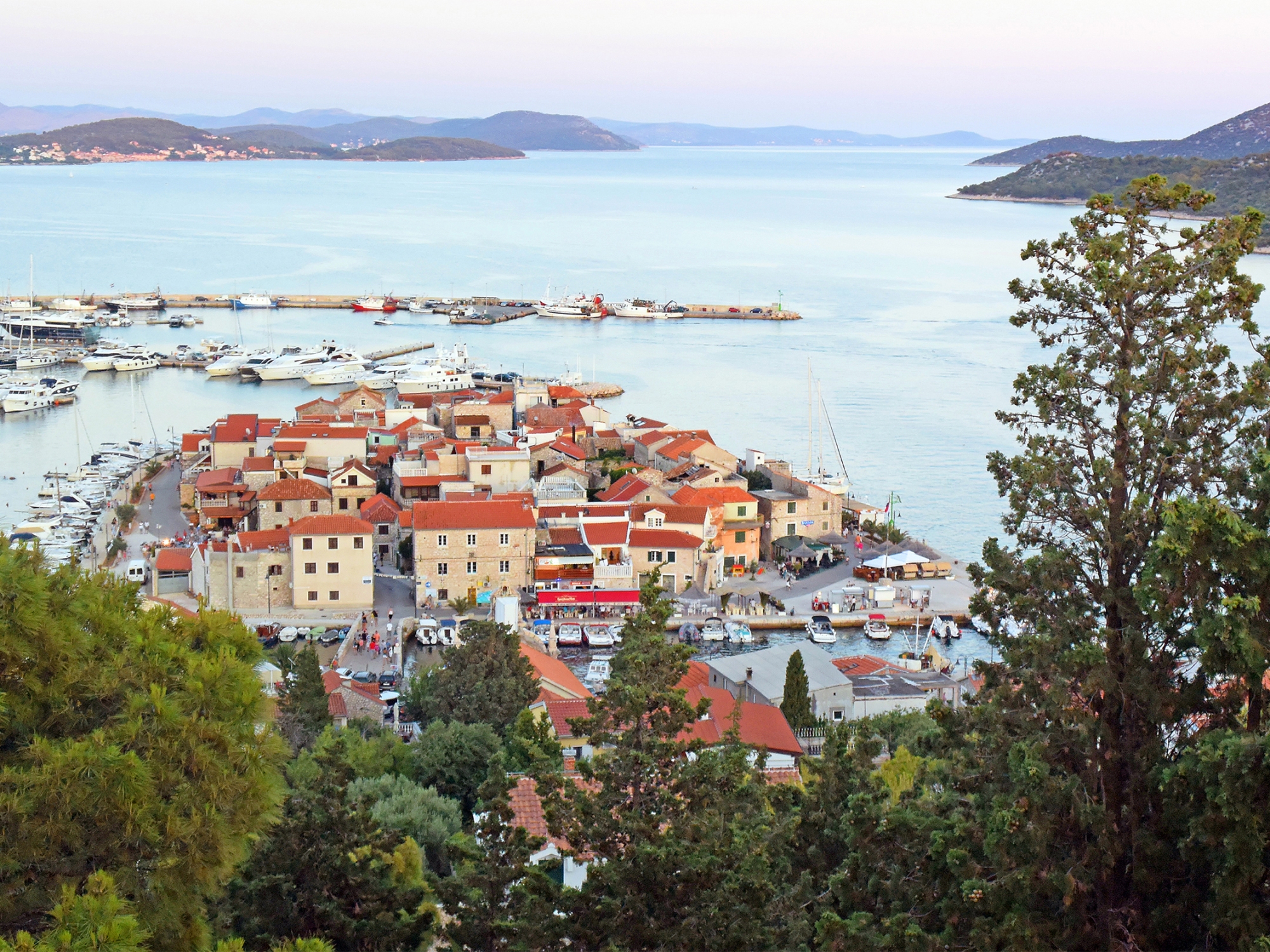 “You have to go, it’s amazing!” insisted my Croatian roommate Edi.
“Yes, yes. We will go… some day,” I replied, probably a bit patronizingly.

This was almost a weekly conversation in our household.

To be completely honest, before I moved to Europe in 2014, I doubt I could have given you one fact about Croatia, let alone point it out on a map. Even after Edi moved to Belgium mid-July, the country hadn’t once crossed my mind as a potential place to travel. Edi would talk about the beautiful and clear waters, the inexpensive food and drink, and I (very ignorantly) would nod along, knowing I would make it there… some day.

It wasn’t until my roommate from America, Sarah, was planning to visit that Croatia jumped into the forefront. I casually mentioned to her that my roommate now would like to take us, and she immediately jumped at the opportunity. Apparently she was a bit more knowledgeable than I, and told me people were calling it “the new Italy.” She told me the waters were supposed to be beautiful and clear, that the food and drink was inexpensive. I got excited. Edi rolled his eyes at me, but nevertheless was excited to bring us along. Add two more people into the mix (our friend Jessica and her girlfriend Vinika), and we were a carful of fun ready for the Croatian sun.

Now, there are many well known coast cities in Croatia- Split, Pula, and (of course) Dubrovnik. Game of Thrones or whatever. But, if you get a chance, visiting some of the smaller cities also has its charm. We stayed in a cute little beach town called Tribunj, in a two bedroom house that we each paid 30 euro for. Total. Say whaaaaa?

The first day we scoped out the beach, jumped in the water, and watched in horror as Edi stepped on a sea urchin, now affectionately known as “seahedgehogs.” He took it like a champion, though, and even led the way as we walked around the city, making sure to point out places and things he enjoyed in his past trips to the coastline. Around 7:30PM we climbed to the top of a hill to see the church of St. Nicholas and watch the sunset over the harbor. 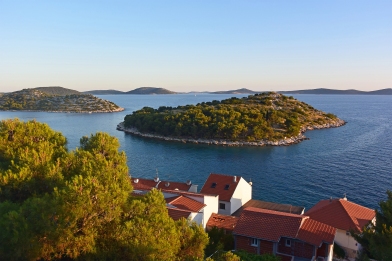 The third day was also a day of extreme highs and lows… but from more of a physical standpoint. As in, we stood on a really high point (as in, on a bridge) and then we jumped to the low portion (as in, we’re fucking crazy).

We all stood, nervous and excited, while we signed our lives away (that’s technically true, they did have us fill out waivers) and got geared up for the jump. The jump itself cost 280 kuna, which is approximately $41/€38. Sarah and I both paid an additional 40 kuna so we could have a camera attached to our wrist for the jump. Edi simply ducktaped his GoPro to his arm.

And the jump was… exhilarating. There are really no words for it. People ask if bungee jumping is scary, and I would definitely say yes. I had gone sky diving when I was 18 (a tandem jump) so I thought I would be prepared, but even that didn’t compare to the adrenaline rush I felt while plummeting down and realizing there was no safety net or support on the free fall.

I think the hardest part of bungee jumping is at the beginning, when you’re standing on the edge of the platform, receiving your instructions. The guy was smart- he was friendly, but very strict on one point. He said, “I am going to say 1, 2, 3, JUMP and when I say jump you have to do it.” And I really did. Because if I didn’t jump when he said to, I’m sure I would have spent the whole day up there contemplating if I really want to go over the edge.

And just as quick as the fear comes in, the freefall is over. Some people are worried that you can feel a jolt in your back/neck when the cable snaps you back but, from my experience, that’s not true at all. It didn’t hurt, but it was rather disorienting. You bounce around for a bit, adjusting to the swing and seeing the world from a different viewpoint (aka: upside down). Then you find the hook they’ve thrown down, you latch yourself in, and you’re back up before you know it. The second scariest part is when you’re back on that platform, unattached to any cables, trying to get to the “safer” side of the bridge. You know, the side where you could get hit by a car. 😉

It would be hard to top a morning like the one we had, but nevertheless, we decided to try. We loaded ourselves back in the car, talking a mile a minute, the adrenaline still pumping through our veins. The next stop on our list was Krka National Park, a park with the best waterfall that I have ever seen.

If your friends jumped off a bridge… 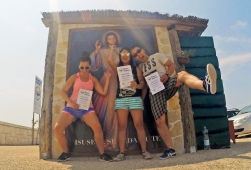 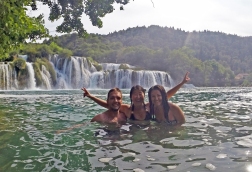 The best way to get to Krka is by boat. We left the car in Skradin and took the Krka organized boat into the park. The entrance fee is 110 kuna in the high season (June-September), but I would have gladly just paid that for the boat ride. The park was simply beautiful- everywhere we looked there was either lush green forestry or clear, running water. The trails were nicely paved and there were small exhibitions along the path that explained many things about the animals, plantlife, and area in general.

But again, the best part was that waterfall. We originally took turns guarding our belongings while the others swam, but Edi and Sarah found a great little cove, and we put our stuff in a tree and swam in front of the waterfall. The area was technically roped off, but after we watched a few people cliff dive from the falls themselves with no repercussion, we decided to risk the hand slap and venture in the no-swim area. We did eventually get asked to leave, but not before we got some great photos in front of the waterfalls. What can we say? I guess we’d all rather ask for forgiveness than beg for permission.

All in all, the trip was great. It was wonderful to see Sarah, one of my closest friends and new adventure buddy. It was great to see Jessica and Vinika, although they live in the Netherlands now and are only a 1.5 hour drive from me. And it was really cool of Edi to use his own vacation time to show us around his homeland. My only regret of the whole trip was putting off Croatia for so long.

…It’s also making me wonder what other great things Edi has been telling me that I’ve completely ignored. Hmmm.

THE TRAVELIN’ SONG: Stacey’s Mom (Fountains of Wayne). When you change the word “Stacey” to “Roko”, the song takes on a whole new meaning about our lovely Croatian landlord.

TIP FOR TRAVELERS:  Croatian waters are beautiful, but they are full of sea urchins (or “sea hedgehogs” as they call them in Europe). Invest in a pair of Aquasocks or sandals that you would wear into the water. You’re going to look awesome, but your feet are going to be safe.

DEFINITELY CHECK OUT: Krka National Park. It has the best waterfalls and beautiful scenery for the lowest cost.