During my 10 days in New Zealand, my friend and I traveled from Christchurch to Fox Glacier to Queenstown and then took a plane to Auckland. To put it all into perspective, the combined total of hours that we drove was probably 15+ hours. And I know that sounds kind of terrible… but that’s because you’ve (probably) never driven in New Zealand.

BECAUSE EVERYTHING ABOUT NEW ZEALAND IS BEAUTIFUL. Just like everything in Australia was created to destroy you, everything in New Zealand was created to be beautiful. In nerdy, designer/editor mode, it’s like the saturation in Photoshop is boosted by at least 15%. The greens are ridiculous. And the water… the water is blue. Like, really blue. Sometimes pale, beautiful blue that complements the grey stone it’s trickling through. And sometimes deep blue that gets muddled by the reflection of the mountain and almost makes you resent that there is a sight that beautiful. 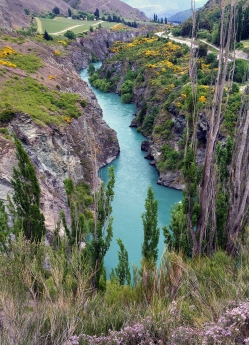 The main reason we had to do so much travel was because we had so many great things on the agenda. There are endless amounts of adventurous things to do in New Zealand- bungee jumping, sky diving, hiking, kayaking, etc. to name a few. And while we wanted to do all of the above, we knew our time (and money) was limited, so we narrowed it down to a select few: hiking a glacier, sight-seeing at the Milford Sound, zorbing, and kayaking in the ocean.

We arrived in Fox Glacier around 5:00PM, but kept it fairly lowkey as we knew we had to save the energy for our hike on the glacier. We got up bright and early (…and begrudgingly); fortunately, the pick up point was right down the street from where we were staying. We boarded the bus and got dropped off at the foot of Fox Glacier. From there we hiked for about an hour, counting a few stops for scenic photos. It took a little longer because, even though there were 10 of us on the tour, there were still 8,000 other tours milling around the same area. Once we neared the glacier, we had to stop to put spikes on our shoes. The guide also advised we get a walking pole if we were a bit uncoordinated. Which I’m not. …I’m super uncoordinated. I poled up.

Walking on the glacier was absolutely amazing. It surprisingly wasn’t cold, but I had bought a ridiculous hat in the gift store right before the hike so I was determined to wear it. Other than that, I was wearing a tank top. They let us walk on the glacier for probably around 45 minutes. there were some really stunning blues inside the ice, which is caused by light refracting and some other sciencesy stuff that I wasn’t really paying attention to. We also chewed some glacier ice and people drank from the running water. All in all, a fantastic and very unique experience. 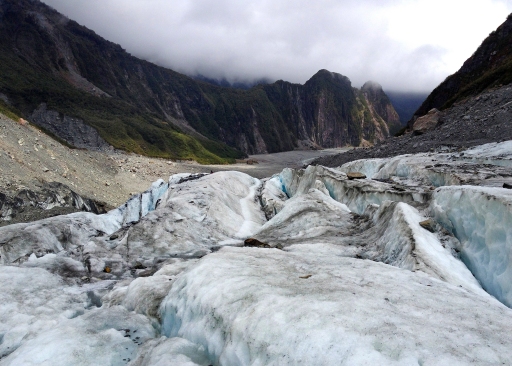 Looking back, I’m really glad we took the morning hike. As we were standing on the very edge of the glacier, an unexpected fog started rolling in. Our guide let out a little “uh oh,” which I didn’t think too much of, until within five minutes the whole area was completely covered in a thick, grey mist. I especially felt bad for the people who opted for a helicopter ride over the top. The helicopter ride costs $399 New Zealand dollar, which is roughly $255/€225. Could you imagine paying that much and not being able to see anything because of the fog?!

…And it looks awesome too.

I’m glad that neither Jess nor I are really morning people. Mostly because I feel I would’ve had to punch her if she was chipper at 6AM when we woke up for our bus tour to the Milford Sound. I was planning on sleeping for the bus ride, but our guide Jamie was actually pretty funny. He pointed out interesting terrains and facts and was mildly entertaining in the way a tour guide should be. We also made a few sight-seeing stops along the way. We stopped at the Mirror Lake and also The Chasm. Honestly, neither really mean too much to me because it was raining and I didn’t bother to read the signs. They sure were scenic, though.

We got to Milford around 12:45PM, just in time to board our ship, the Lady Bowen, a boat named after the waterfall that supplies fresh water to the town. Unfortunately, it was foggy and rainy most of the day, so a lot of the sound was covered in a thick mist. Actually, on the subject of sounds, did you know the Milford Sound is really a fiord? The early settlers misnamed it, but I guess they weren’t so into renaming Milford, and instead named the surrounding area “Fiordland” to make up for it.

Again, I’m not complaining, because it was very beautiful. But I think I Spider Man 2ed it, where everyone told me it was so great that I built up expectations too high in my head. All in all, I’m so glad we went and got to see it, but I think we saw  just as stunning sites on the side of the road while we were driving. However, looking back on the photos, I’m now more blown away than I think I was originally. 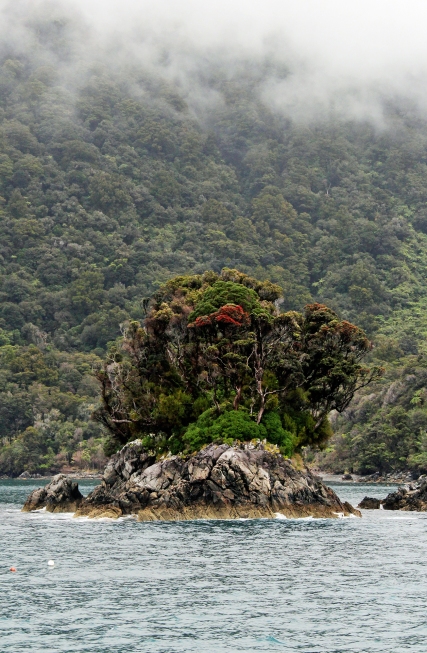 For those of you who don’t know what zorbing is, definitely look it up on YouTube or something as the videos will be worth your time. Essentially, people strap you into a big plastic ball and then roll you down a large hill. I get motion sickness crazy bad, so to me, this sort of activity sounds absolutely terrible. But Jessica and Shane really wanted to go, so we stopped in a small area outside of Rotorua who advertised different versions of this torture device.

We decided Shane, being the only man in group, should definitely go first. He chose the water version of zorbing, which actually seems a bit more appealing than the land version, although I didn’t bring a swimsuit or a change of clothes so there was no way I was to be persuaded. He stripped down to his boxers and then went down a zig-zag path in a giant plastic ball filled with water— it essentially seemed like a moving water slide. I have to admit, it did look like loads of fun, and he stayed upright the entire time.

Jessica, on the other hand, was strapped into her ball with a harness and then shoved down a giant hill. The whole process probably only took around 10 seconds and she claims it was a lot of fun- but I’m pretty sure if I did it, the fun would be for everyone else… later… when they were watching me puke.

After zorbing, we went into the town of Rotorua for a bit to try to go to these horrible smelling, sulfur thermal pools. I think we were all willing to put up with the smell until we realized they were going charge us for the experience. Um, no thanks. I’ll smell like rotten eggs for free in my own time. We also briefly drove through Hobbiton, but didn’t stop. The place looked pretty cute, though. (That’s the town based on The Lord of the Rings trilogy, I don’t know if you’ve heard of it. I think it might be famous or something.)

We decided that even though our hotel was in Auckland, the most of the fun you could have in the North Island (of New Zealand) is outside of the city. Therefore, we made the 2-hour journey to Coromandel to go kayaking in the area where The Chronic(WHAT?!)les of Narnia: Prince Caspian was filmed. I mean, that’s not why we went there, but that is pretty cool.

The beach we started at was named Hahei Beach, but I insisted on calling it Ho Hey!, like the Lumineers song. Cathedral Coves Kayak does a great tour. For $95 we had around 3 hours in/around the water. We met our group (10 of us) around 1:15PM and, fifteen minutes later, we were in the water. Our guide was informative and friendly, and at the beach he made us all hot chocolate. Like, legitimate hot chocolate, made with frothed milk and cocoa powder.

The beach, Cathedral Cove (hence the tour group’s name), was also absolutely stunning. The cove overlooks the Coromandel Peninsula, and even though there were many people there, it still seemed peaceful, with plenty of interesting rock formations. We sat there, had cookies and hot chocolate, and I got absolutely covered in pink-shell sand because I was somehow dripping wet, despite the kayak cover and rain jacket. 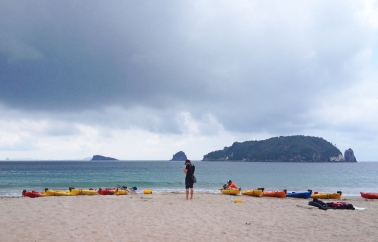 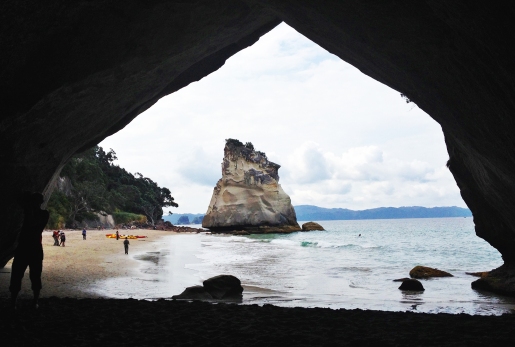 These adventures have been some of the major highlights of my life, and I know they are experiences that not many people get to have, so I’m super appreciative. And I may never get the chance to go back to New Zealand, but I am sure as shit going to try.

THE TRAVELIN’ SONG: Jump on My Shoulders (AWOLNATION). We had tons of good songs during our road trip, but one of my biggest successes was getting Jessica to listen to and enjoy AWOLNATION.

BUDGET: Most of the funding was paid for by Jessica’s company, but we probably spent around $800 on transportation, food, and activities.

TIP FOR TRAVELERS: Some places do not serve alcohol. But, bars and grocery stores will sell you beer or wine that you are allowed to take into restaurants.

DEFINITELY CHECK OUT: Try your hand at surfing. Australia is one of the best places in the world to surf, and you know, YOLO and stuff.